Homestead Roots
My tremendously supportive husband & I have 3 wonderful children, 1 dog, 12 laying hens, 2 dairy goats, 3 bee hives, and a 2000 sq foot vegetable garden on a small 1/4 acre lot in the city. In the center of it all is our small 1,000 sq foot house purchased in 2008 as a foreclosure that we fully renovated to host our growing family, home school adventures, and small home business (CozyLeaf.com). We have a desire to learn a path to self sufficiency finding ways to be good stewards of the resources God has given us. We want to learn to live with less as we laydown roots to our little homestead. 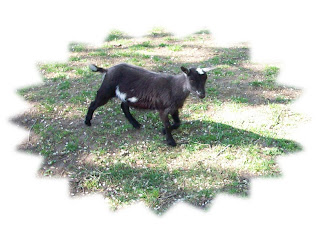 I have drawn out my garden plan SEVERAL times now! Poppy is obviously in rebellion toward the way she thinks I should plant my garden...or just doesnt want me working in the garden at all so decides to eat the plan each and every time I draw it out!
The first incident: I was sitting out in the garden with both of the goats and all of the chickens (before anything was planted) just looking and trying to decide what to plant where ... when out of nowhere Poppy came over, snatched up the paper with her little mouth and took off running (as if she knew it was wrong). Before I could catch up with her she had eaten the WHOLE paper!
The second incident was pretty similar to the first, but I was able to catch up to her before she devoured the entire paper...but one corner really doesnt help too much!
So I decided I better change my strategy for carrying my garden plan to the garden... I put the paper INSIDE of a book... yep she got to it!
The fourth incident: I had it folded up and put in my back pocket...where I thought it was definately safe...wrong! I guess a small piece was sticking out of the back of my pocket and she snatched it and took off running...I didnt even chase her that time I was just so shocked and couldnt stop laughing!

So I have decided that I need to do something on the computer so she cant eat it! Then if she does eat it I can just print it out again and it isnt lost! I found a really neat online garden planning software with a 45 day FREE trail! Plangarden.com. I am pretty excitted about it because it is a VERY organized system...and those of you who know me know that I LOVE spreadsheets and organizational things! This software allows you to export your garden charts and garden logs to an excel spreadsheet! LOVE IT!

We will see how it goes and hopefully Poppy doesnt get in the house and eat my computer next!
Posted by Homestead Roots at 7:57 AM

Be A Simple Mom!