Homestead Roots
My tremendously supportive husband & I have 3 wonderful children, 1 dog, 12 laying hens, 2 dairy goats, 3 bee hives, and a 2000 sq foot vegetable garden on a small 1/4 acre lot in the city. In the center of it all is our small 1,000 sq foot house purchased in 2008 as a foreclosure that we fully renovated to host our growing family, home school adventures, and small home business (CozyLeaf.com). We have a desire to learn a path to self sufficiency finding ways to be good stewards of the resources God has given us. We want to learn to live with less as we laydown roots to our little homestead.


I love Pears! They are one of my favorite fruits and for Easter this year Bryan's parents sent us a lovely fruit basket with a bunch of pears! The day before we got our lovely basket in the mail, I had bought a very large bag of pears at the store...Pear Surplus!! Well the basket of pears were gone rather quickly because they were delightful, but I think after that everyone was a little full of pears so I had a dozen pears that were not getting eaten and were on their last leg. A few nights ago I decided that Pear Jelly would be fun to make...use the last of the pears before they go bad! Seeing as yesterday was a rather chilly day here in Kansas, what better day to do some canning!! It has been in the 80's which is not the day you want to have a large pot of boiling water in your house heating everything up! But yesterday I actually started a fire in the woodstove to take the chilly edge off (I think it got into the 40's) so why not do some canning!!
Supplies you will need:
Canning Jars, Lids, Bands
Large Pot for boiling mixture
Large Pot for water-bath canning your jars
Canning funnel

Ingredients you will need:
5 ½ cups chopped peeled and cored pears, about 8 pears 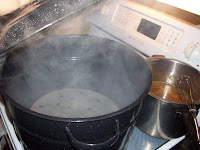 Step 1: Sanitize your canning jars and lids and get your water bath canner going with boiling water.

Step 2: Once I pealed and cored the pears I actually put them in the blender to get a really smooth mixture. I used 9 Pears and ended up having 5 ½ cups of pears.
Step 3: Pour your pears into a large pot.

Step 4: In a bowl, combine the fruit pectin with 1/2 cup of the granulated sugar; mix well. 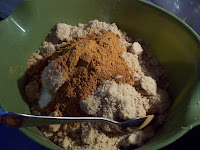 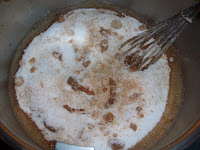 Step 5: Add the pectin mixture to the pears and cook, stirring, over medium-high heat, until the mixture comes to a full rolling boil.

Step 6: Gradually stir in the remaining sugars and cinnamon. Stirring constantly, again bring the mixture to a full rolling boil. Boil for exactly 1 minute longer.
Step 7: Remove from heat and continue stirring for 5 minutes. Skim excess foam from the mixture, if necessary. 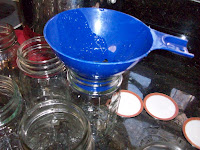 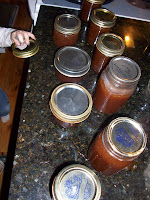 Step 8: Fill the sanitized jars with hot fruit mixture, leaving 1/4 inch headspace. (Use a canning funnel to make it cleaner and easier!) Wipe rims clean with a dampened cloth or paper towel and fit lids on tops of jars. Screw on the bands firmly. (You can see Henry's little hand in the picture on the right helping get all the rings ready for the jars...He was just excitted to have Pear Jelly) 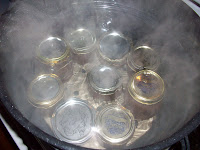 Step 9: Lower the jars into the water and add more very hot or boiling water so the water is 2 inches above the jars. Bring to a boil. Cover and boil gently for 20 minutes. 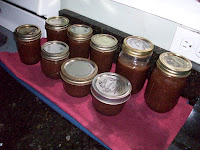 Makes 10-11 half-pint jars (I did 7 half-pints and 2 pints, you can see from the picture on the left that one of my pint jars wasnt quite full so I let it cool a bit and then put that one in the refrigerator to be eaten first) 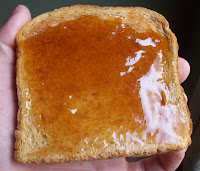 The Jelly set overnight and was ready to eat with our toast this morning for breakfast. It was VERY yummy. The extra cinnamon made it absolutely delightful!
Posted by Homestead Roots at 7:58 AM

Be A Simple Mom!